The world’s 2nd-oldest person, who turns 117 today, has recovered from COVID-19 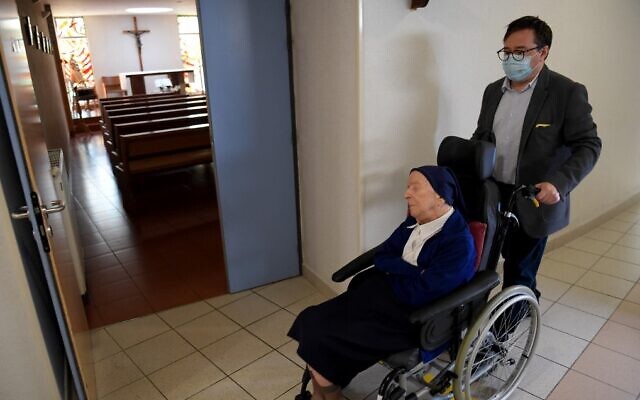 The world’s second-oldest person, who turns 117 today, has recovered from the coronavirus.

Lucile Randon, a nun from the south of France, based near the city of Toulon, tested positive for the coronavirus last month, as the virus swept through the nursing home she was staying in.

Sister Andrée as she is known, is blind and uses a wheelchair and according to The Guardian via Business Insider, she told local media that “she didn’t even realise” she had it as her case was asymptomatic. 10 of the 88 residents from Sister Andrée’s nursing home died from the virus.

David Tavella, a spokesman from the Sainte Catherine Labouré retirement home, said she was self-isolating in her room whilst she was affected, he revealed in interviews on Tuesday. This meant Sister Andrée was unable to see other residents and couldn’t attend Mass.

“She didn’t ask me about her health, but about her habits. For example, she wanted to know if meal or bedtime schedules would change,” Tavella said, as reported by the BBC via Business Insider.

“She showed no fear of the disease. On the other hand, she was very concerned about the other residents,” he added.

According to the Gerontology Research Group’s (GRG) World Supercentenarian Rankings List, Sister Andrée is Europe’s oldest living person as the oldest person in the world, Kane Tanaka from Japan, turned 118 on January 2nd.

Sister Andrée’s response to how she has been able to live for so long after questioned by a French radio stations was, “I’ve no idea what the secret is. Only God can answer that question,” according to the Guardian.

The world’s second oldest person, born on February 11th 1904, has lived through the Spanish Flu and both World Wars.