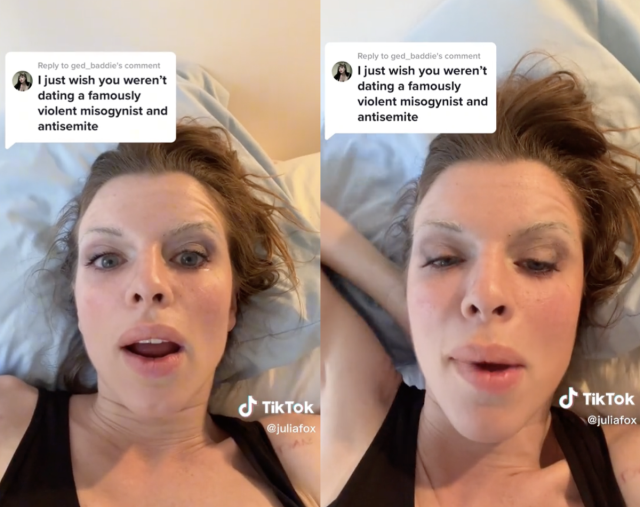 According to Julia Fox, who recently appeared in an Elizaveta Porodina-shot KNWLS campaign, she was “delusional” to think she could support the artist Kanye West during their brief relationship.

In a video posted to TikTok on Friday, Fox addressed a comment about “dating a famously violent misogynist and antisemite” by thinking back on what she claims to have seen while dating Ye.

“First of all, the man was being normal around me,” Fox said. “And not only that but the Kardashians, when I had a fashion line 10 years ago, they actually bought our clothes and sold them in their stores. So I’ve always had, like, a love for Kim, especially. And, like, even Kourtney especially. All of them pretty much. But no, like, the big three: Khloé, Kim, Kourtney. So by the time me and him got together, he hadn’t been doing anything, you know, like ‘out there’ yet. The only thing he had done was change the name in the song and said ‘Come back to me, Kimberly.’ That was, like, the only thing when we met.”

The latter obviously alludes to Ye’s decision to alter Runaway’s lyrics during the Free Larry Hoover Benefit broadcast last year. Fox then referred to what appeared to be a contentious text exchange she had with Ye, marking the instance as the one where she first considered being able to “help” him.

“I’d already been like, ‘Dude, I’m not gonna stick around for this shit,’” Fox said, adding that she also realized “pretty quickly” that Ye wasn’t going to accept her help.