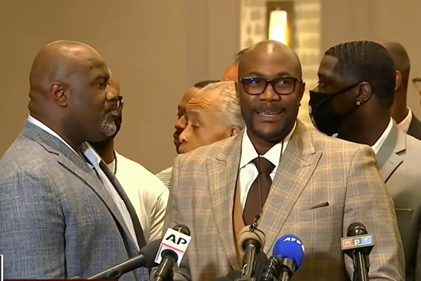 George Floyd’s brother, Philonise, is not offended by a controversial social media post by the Las Vegas Raiders that reads ‘I Can Breathe’ and is not demanding that the NFL franchise takes it down.

When speaking to the media, Philonise gave an emotional message to everyone around the world saying that “we are now all able to breathe”.

In a statement which cleared up the Floyd family’s stance regarding the Raiders’ post, Philonise said as quoted by TMZ, “On behalf of our family, I would like to extend our deepest gratitude to the Las Vegas Raiders organization and its leadership for their support of our family and for our nation’s ongoing pursuit of justice and equality for all.

“Now, more than ever, we must come together as one and continue on in this fight. For the first time in almost a year, our family has taken a breath. And I know that goes for so many across the nation and globe, as well.

“Let’s take this breath together in honor of my big brother who couldn’t. Let’s do it for George.”

Raiders’ owner Mark Davis took responsibility for the social media post which was published moments after the verdict that saw Derek Chauvin found guilty on three counts of murdering George Floyd. Davis said that it was Philonise’s words at the news conference which inspired the post.

“If I offended the family, then I’m deeply, deeply disappointed.” Davis stated on Tuesday evening.