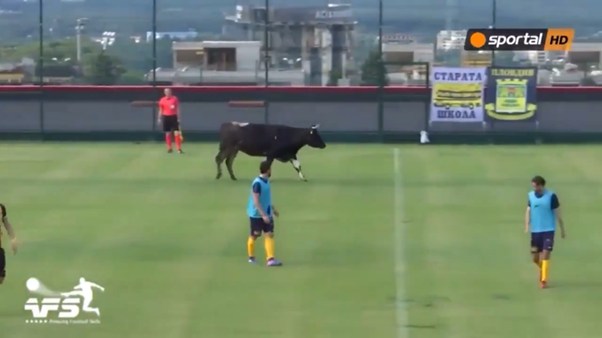 We’ve had the squirrel that raced onto the Highbury grounds during Arsenal’s Champions League tie with Villarreal in 2006. We’ve had a chicken released by Blackburn Rovers supporters at Ewood Park in the past. We’ve even seen a cat run onto the Anfield turf during a League Cup tie between Liverpool and Tottenham in 2012.

But have you seen anything more bizarre than a cow, yes a cow, and a dog postpone a football match? The two were seen strolling around much to the laughter of the players who had been stopped in their tracks.

Watch the scenes unfold below. It’s fair to say there was great moovement between this troublesome duo:

A cow and a dog casually invading a football match pic.twitter.com/fQNHuXK30d